The Department of CS&E has MoU with two Institutes:

The Department of Computer Sciences Engineering had signed MoU with CISCO Systems, Bangalore on 21-01-2018. The CISCO centre of excellence on Advanced Networking available in the department provides world class networking infrastructure. The faculty members have been constantly trained by CISCO Networking Academy, to offer the latest industry relevant networking curriculum. The Department is offering the certification course CCNA (Cisco Certified Network Associate) to the students since 2018. The course provides practical hands-on experience to the students on networking concepts during the 110 hours of the course.

As per the CISCO requirements, the CCNA course is divided into following four modules:

The CISCO Centre of Excellence is equipped with sophisticated CISCO hardware like routers, switches, wireless adapter, cables and PCs to effectively deliver the CISCO CCNA curriculum. Packet tracer software is also installed in computers to simulate the various network configurations and provide a better understanding on the networking concepts.
CISCO Net Riders, a National Level competition and various department level competitions related to networking are conducted regularly with the equipment’s available in this laboratory. Once in a year students from rural schools are invited and the equipment’s in the laboratory are demonstrated to motivate them to pursue their career in the networking domain

The following equipment’s are available in the Cisco Centre of Excellence at ATME College of Engineering.

Number of students registered for the CCNA module-1 training in the year 2017-2018 is 96 members and have secured the certificate for module-1. 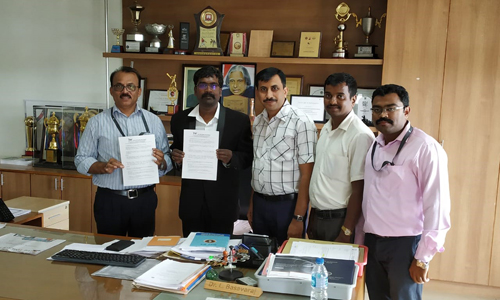 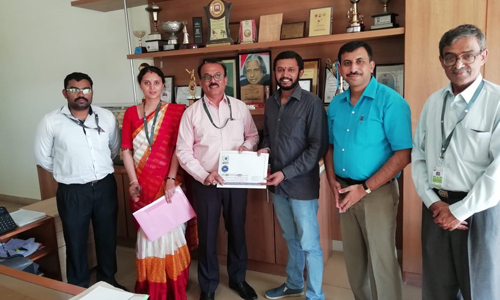 The main objectives and outcomes of the MoU with these institutes are as follows:

Skill development training on Web Application is conducted for the year 2016-17 to the students of 6th Semester.

Skill development training on Quick Test Professional (QTP) is conducted for the year 2017-18 to the students of 8th Semester.

We reached the campus at 11:00 AM. The visit was accompanied by A. S. K. V. S. Sharma, Co-Ordinator, Information and publicity, CFTRI.

We are allowed to sit in a board room and shown with the techniques of food management and the various techniques followed by the CFTRI to prepare various food products, processes, and equipment types.

Then, we had an interaction session with Mr. Sharma. Further, the visit continued by visiting the food preparation centres. We got to see the preparation of rice and lemon pickles with the application of technology in the equipment’s.

The visit got completed by 2:00PM. On overall, the visit was helpful in knowing the applications of technology in the field of food product preparation and the maintenance.

We reached the campus by 8:45 AM. We logged into the campus after the security check at 9:30 AM. We were accompanied by Mr. Gokul Muthuvelu, Test Analyst, Infosys. We were taken tour around the campus which was around 357 acres. Since, it was a vast campus we were able to cover only 50% of it.

Mr. Gokul Muthuvelu gave a brief about the campus. It has

First, we visited SDB (Software Development Block) were new software is developed and testing takes place. Then we went to SEZ (special economic zone) where the tax related activities takes place. To enter the SEZ the employee must have an authorized identity. We went to the Amphitheatre where all the programs will be taken place like Fashion show, dance etc. It had an accommodation of around 10,000 people.

The campus had a multiplex where 7 regional language movies would be played on every weekend. The multiplex is also a place where National and International conferences will be conducted.

Then, we had been to ILI (Infosys Leadership Institute) which had Gyms, Smart super market, Swimming pool, Badminton court, Seminar halls etc. We were given about 15-20 minutes of break. After the break, we were directed to Seminar hall around 11:30 AM.

Initially we were made to watch videos about the history of Infosys and their founder’s achievements.

All the students were divided into 7 groups; each group contains about 9 students. One among them was made a team leader. Each row was made a team. Each team was provided by one activity. After giving the brief about the activities, we were provided 10 minutes of time, where each group must complete both the task.

The activity was to advertise a product (Name given by Mr.Gokul). After the completion of this activity, each group leader were provided a chance to share their experience , to tell what was the difficulty they faced during the activity and also what they learnt from it.

After the activities we had an interaction with the employees to clear our doubts and also about recruitment process of Infosys. Later we had lunch at the Infosys Canteen. By around 2:30 PM we logged out of the campus.

The entire campus tour was by walk. We were provided with umbrellas as it was a sunny day. The maintenance of the campus was very good and hygiene. We were allowed to walk only on footpaths and zebra-crossing but we were not supposed to step on the lawns. On whole the visit was very helpful in building the aspirations in the young minds.

The main objective behind the visit was to make students aware about how various activities related to satellite is carried out in ISRO and give them knowledge about the working of it.

Our journey began early morning 5:30AM from Musuru, with huge enthusiasm and prayers. We reached the campus by 10:00AM. ISRO entrance was majestically stood and welcomed us.

For the benefits of students there is space research exhibition centre ISAC. Scientist explained each and every display unit kept for exhibition viz: the first Indian satellite Aryabhata, APPLE, IN-SAT series etc. Satellites are basically of two types- Indian Remote Sensing (IRS) Satellites and communication satellites. Followed by brief session on Manglayan & Chandrayan, Simulation on GSLV (Geosynchronous Satellite Launch Vehicle), the volunteers has given a Sight of green room where details of Chandrayan-II launcher were given and we were really fascinated by checking the details. Along with we could have a sight of photos of moon taken with different angles which were fascinating too. And we got the chance to raise our question regards the technology behind it.

It is rightly said that “see & know” is better than “read & learn”. The visit had a huge influence in the minds of the students, as part from everyday curriculum. The students were motivated as ISRO has opened door for Engineering students & making them understand how they can be the part of such PROUD organisation.

This visit wasn’t the end as we had the opportunity to visit HINDUSTAN AERONAUTICAL LIMITED (HAL) museum. This too gave us exposure of human fighter flights and jets, we were astonished and amazed as the model which were present were of real and used one. We are very proud Indians since these depicts how defence people fight for our security and safeguard us.